BEL AIR, MD — Klein’s ShopRite plans to renovate and expand its Main Street store in Bel Air. To this end, the company applied for zoning changes on several of the Klein family’s properties and obtained them through a company called Colgate Investments.

“In order to meet the needs of our many thousands of customers, we share their strong belief that we must invest in the renovation and expansion of the ShopRite of Bel Air store on Main Street,” the Klein family said in a statement to Bel Air patch.

“While we love our current Main Street store, it is an old and antiquated building that cannot meet the needs of our customers,” the Klein family said. “Without this renovation, the profitability of the store is in question.”

The supermarket was built around 1957, according to Bel Air Senior Planner Rowan Glidden, who said it was greatly expanded in the 1980s.

“Minor changes have been made since then,” Glidden told Bel Air’s planning committee during its May 5 meeting.

Plans unveiled in May indicated the additions would allow for more interior storage and cargo area improvements. The demolition of some buildings would also be part of the project, Glidden said.

Colgate Investments presented plans during the May meeting, but the commission asked project stakeholders to come back after an appeal period and once plans were clearer.

A Frederick Ward project manager said he was hired “late in the game” and is playing “catch-up” ahead of the Planning Commission meeting in May.

The project leaders presented their plans Thursday night before the Bel Air Planning Commission with more detail on the landscape, subdivision and location plans.

In summary, the plans called for a 4,386 square foot building next to a 40,443 square foot supermarket.

Some questions included plans for lots along Broadway and Gordon streets. 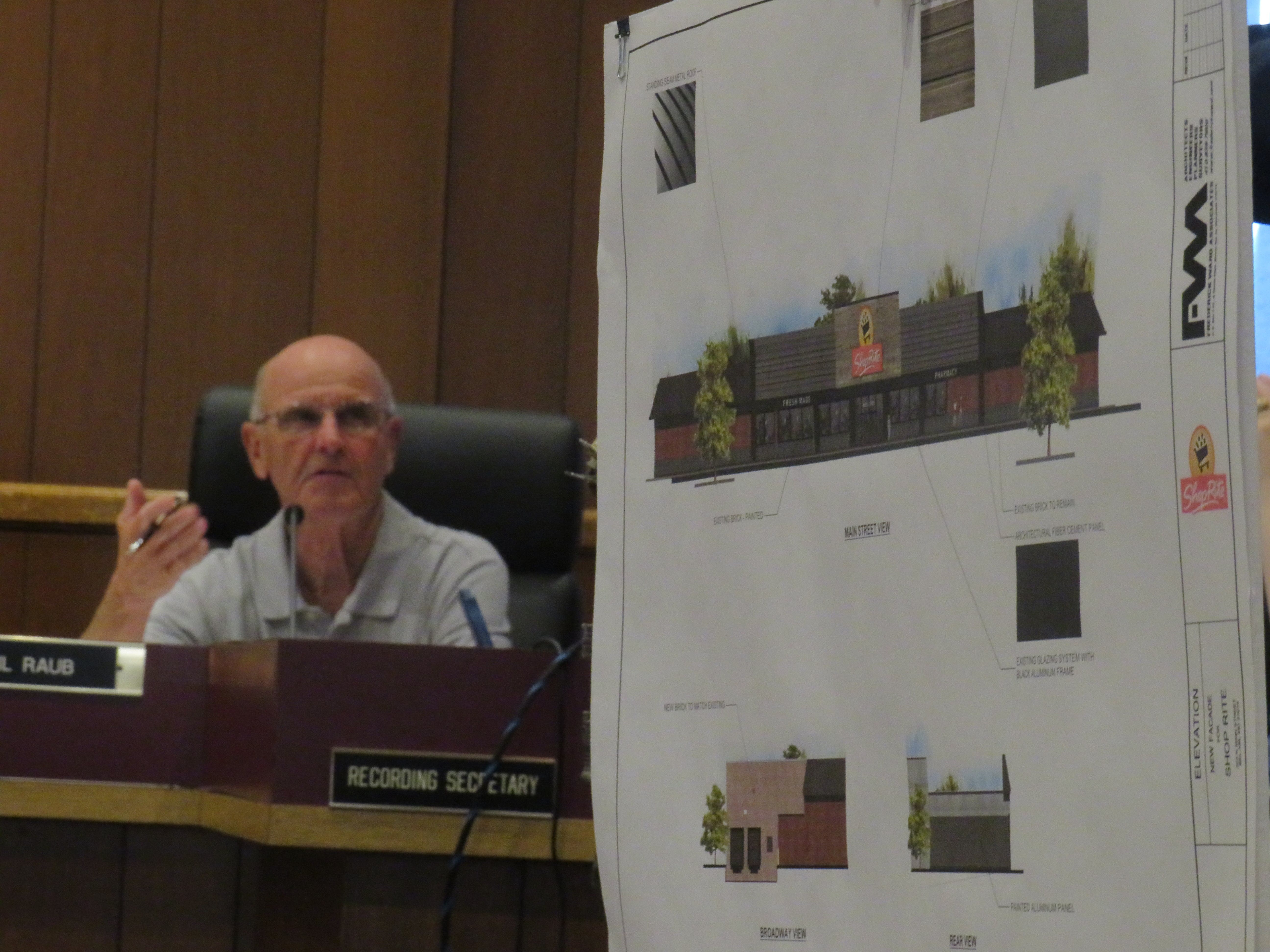 Phil Raub of the Bel Air Planning Commission asked questions about proposed changes to the loading dock and other parts of the ShopRite plan. “The last thing I want is for these trucks to be hanging on Broadway longer than they are,” Raub said at the May 5 commission meeting in Bel Air. “It just doesn’t look like a complete application.” His colleagues agreed and asked Klein to return to the June 2 meeting. Photo by Elizabeth Janney/Patch.

“We need to develop more of our property at this location and incorporate an adjacent property into the business plan,” the Kleins said. “To achieve that goal and make this business the common good that the City of Bel Air deserves, we had to require the City to redesignate some of our Broadway lots to comply with local statutes.”

When an adjacent lot was needed for the expansion, Bel Air Patch asked ShopRite’s owners why seven were included in Colgate Investments’ request.

“The property adjacent to our current Main Street store is earmarked for the renovation and expansion of that store to better serve the needs of the community,” CEO of Klein’s ShopRite of Maryland Marshall Klein said in a statement to Bel Air Patch.

“Separately, our clients and other businesses have reached out to us expressing their desire for more residential and modern office space in the city of Bel Air,” Klein said.

The Bel Air Board of Town Commissioners approved the rezoning of 13 lots at its May 2 meeting. These seven properties owned by Colgate Investments were part of the rezoning: 43, 45, 53, and 57 East Broadway and 30, 38, and 44 East Gordon Streets. They are now designated as a B-3A, or Business Gateway District, which may include “a mix of retail, service, office, civic and residential uses,” according to Bel Air zoning information. This type of zoning can include new homes and uses to attract visitors, such as specialty shops, restaurants, theaters and hotels.

“This rezoning allows for a world-class mixed-use development that gives families and local businesses the option to join or remain in the city of Bel Air,” Klein said in a statement to Patch.

More than 1,000 Bel Air residents signed a petition after the rezoning was approved by the Bel Air Board of Town Commissioners, declaring their opposition. However, she was deemed invalid by the electoral judges after the City Attorney declared her null and void, as she said she had not contested either a petition or the entire bill.

However, the city ordinance states that a referendum request can be submitted up to 41 days after the ordinance is passed.

The Kleins said they wanted to involve the community in plans for the future.

“We will seek significant community input as part of this planning process. The city ordinance is explicitly stated that landscaping and lighting standards conform to strictly established criteria. In all of these projects, we intend to adhere to the highest architectural standards that represent an excellent neighborhood to live in,” Klein said. “We’re decades-long friends and neighbors from Harford County — not people from outside. Our history as active owners of all of our properties reflects our family’s commitment to being good citizens and neighbors.”

Below is the Klein family’s full letter to Bel Air Patch: