A British family is set to move into their dream home in the lush Colombian mountains after building it entirely from shipping containers at a cost of £52,000.

Actress Fiona Rivadeneira, 43, long dreamed of building her own home in an exotic location growing up in the Surrey suburb.

After finding the perfect site in the Colombian mountains, Ms Rivadeneira and her husband Juan Carlos, 46, took the unusual step of using old shipping containers to build a new place for their family to grow.

After an 18-month struggle that included logistical headaches transporting multiple containers up the mountain, the pair are putting the finishing touches on their one-of-a-kind £52,000 project.

The couple and their two children, Sofia, 11, and Sebastian, 10, are finally preparing to move into the stunning property.

For the same price you can currently buy a single parking space in a car park in Islington.

At first, friends reacted with disbelief to Fiona’s unusual plans, saying it would be impossible to get even the 40ft containers to the site.

Fiona said: “People said we were crazy trying to get the materials up a winding mountain road and often asked us why we were building with containers?

“Now when you see the transformation, say wow.”

Actress Fiona Rivadeneira, 43, and her husband Juan Carlos, 46, have long dreamed of building their own home in an exotic location. They eventually settled on the remote Colombian mountains for their dream family home 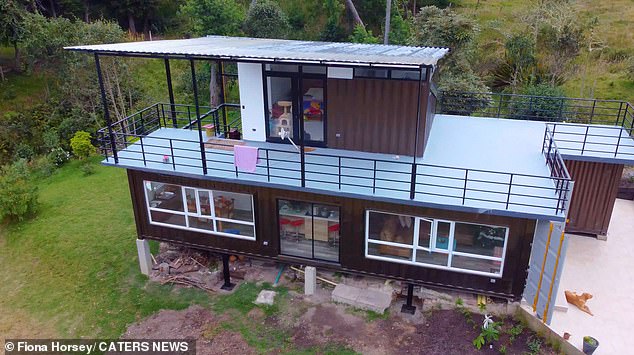 The pair are putting the finishing touches on their £52,000 project after a 12-month struggle that included a logistical headache transporting multiple containers up the mountain

The 43-year-old actress describes herself as a country girl who loves the outdoors and wanted to build her own house.

Renovation began in June 2020 on the site of a house that collapsed due to flooding.

Fiona added: “We built on top of a house that had collapsed due to flooding and then slowly been taken apart.

“We had to dismantle some chimneys and old remains of walls to get the containers up.”

Fiona started the design and build process by looking at similar designs online and then asked an architect to create a house plan.

Fiona said: “From there we went on with a contractor and his team.

“I was responsible for purchasing materials, organizing and supervising the construction workers and I loved it.

“The stress was normal, but I had absolute confidence that I could do it, I never doubted it.” 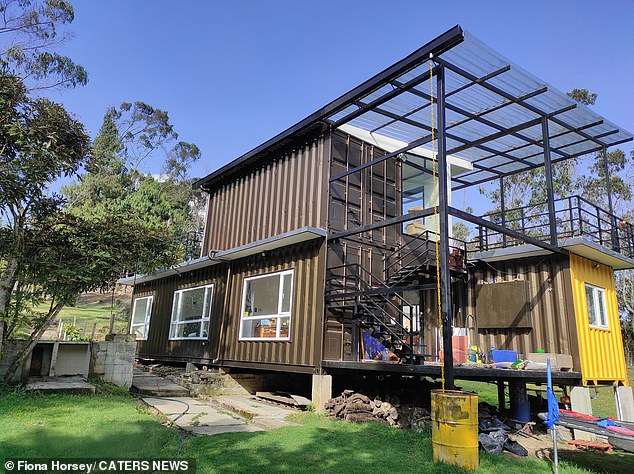 At first, friends reacted with disbelief to Fiona’s unusual plans, saying it would be impossible to get even the 40ft containers to the site. 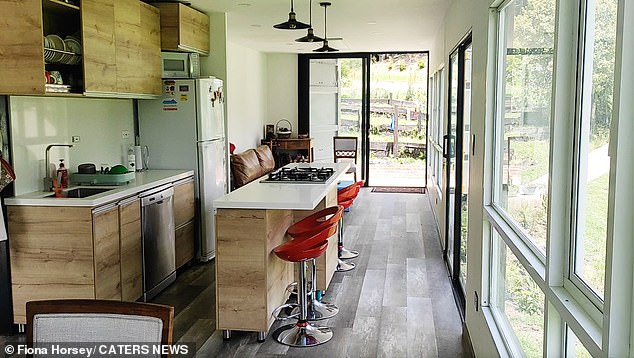 In the modern and spacious kitchen in Fiona’s new home, which consists entirely of disused shipping containers 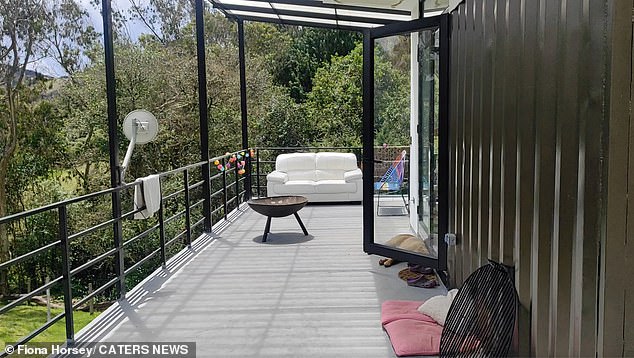 Fiona adds: “Containers have always fascinated me and I looked up pictures and ideas online.

“I love reusing and recycling, seeing something turn into something useful, and I love their shape and adaptability.

“I have taken as many precautions as I could have foreseen.

“There are now mistakes that I regret, but everything can be fixed with money and effort.

“For example, we should have put in some extra foundation pillars because one of the containers is slightly bent, so we put two more pillars underneath to support it.”

But after a year, Fiona’s vision was almost complete and now her favorite room is her bedroom.

She said: “I love my bedroom with its big windows, the light and the beautiful view. I also love the terraces.

“Reusing all the window frames from an old apartment was a good thing, the container can be adapted to anything, just cut and go.

“We are still a work in progress, we still need to put more patio roofs, glass covers, curtains, cabinets and beautiful gardens surrounding the container.”